The Native Americans are forming a multiplicity of people.In their veins flowing mongol blood,european,blood from the middle east races and even african.The first one crossed the Béring ground bridge from Asia to America 35 000 years ago,maybe before.the first emigrants arrived in small groups because otherwise it should be impossible to hunt if they were numerous.They went down to south,crossed Alaska traveled Canada and spread on the United Sates territory,Mexico and central America.In South America they went along the Ands Cordillera and immerse into the jungle.Then they arrived to the cap Horn.They only had one purpose,survive,find food.
In the new world,they gathered in groups,learned eat wild plants.Some of them began to grow these plants like corn,beans,gourds.
Some of them were hunters and plunderers until two centuries ago.
Many Indians were sedentary,farmers like the Zunis and the Pueblos from the Rio Grande.Others were nomads,the navajos,the Apaches,the Cheyennes,the Arapahos and the Comanches.The Omahas.The Kiowas,the Poncas and the Pawnees moved from one region to another.

The Eskimos traveled thousands of kilometers away and probably detached themselves from the Aleuts some 4000 years ago, hunting in skinned Kayaks and moving dog-sledged. Alaskan hunter-gatherers formed the first wave and the climate and sea level stabilized there, favorized an abundance of marine food. In the 17th century, in the Mississippi region, the Cherokees settled in the north In about a hundred villages of about 60,000 people. In California the Indians lived from land and sea and their villages were managed by powerful chiefs who favored the growth of the population. By the year 900 the Anazasis, Ancestors of the Hopis, Zunis and other Pueblos, were farmers living in multi-room dwellings in New Mexico. The arrival of Europeans changed irreversibly the living conditions of the indigenous populations. Vikings, French, English and Spanish explored the coasts of America and settled there. Colons, missionaries and explorers swarmed in many regions where they spread diseases and gradually forced the Indians to renounce to their traditions. 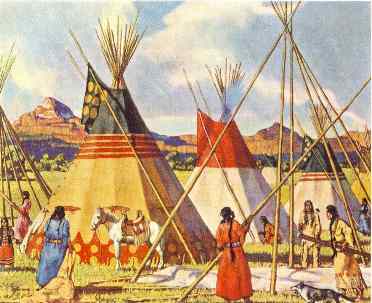 The day Columbus discovered America,about 840 000 "Indians"were living on the actual United States territory.Today they are about 3 millions but less than one third are living into the reservations.The biggest tribes are the Cherokees(730 000)and the Navajos(300 000).There are 263 tribes in the country.
Some reservations are very large.The Navajos reservation in North Arizona,spread to New Mexico and Utah.It's larger than Connecticut,Rhode Island,Massachusset and New Jersey.
After 1887 any reservations disapeared and in the fifties some were "eliminated"because the white man wanted to integrate them in their own culture.Through the country,the Indians are trying to save their traditions,culture and languages.
Because their traditionnal live slowly disapear,all about their culture becomes precious.The arts and crafts,the tools,the clothes,weapons are treasures,and their lifestyle arouse more interest. 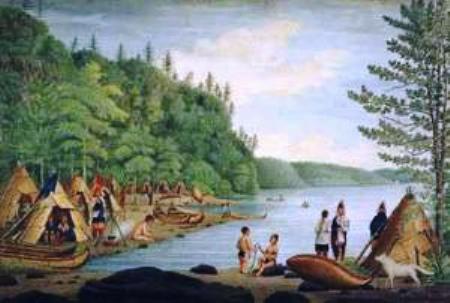 Unlike Pottery and Weaving,Indian arts and crafts is a prosperous business in the South West of the United States.It improved and became more sophisticated than before.Today the silver by the Navajos,Zunis and Hopis is very developed.
The Zunis created their own art.In the year 1830 they began to make jewelry in copper and brass.Near 1870,after the comeback of the Navajos from Bosque Redondo,the Zunis got in touch with them and were dazzeled by their art.They learned the technic and developed an inlay style and stone mosaic.When the Navajos began to includ turquoise on the jewels around 1890,the Zunis imitated them but they used their own style and technic.
The Navajos worked more with silver and less inlay,still today.The Zunis carry on making stones assembly with turquoise,coral,jet black and even mother of pearl.Until 1920,The Zunis sold their production to other Indians,but now their Jewelry is sold out of the south west indian boundary.
The Hopis,like the Navajos,realised for centuries,jewelry in special silver.They are known for the work of overlay.First they are cutting a motive in a sheet of silver which is weld on a second sheet and then decorated in black.
The Navajos opened arts and craft way in the south west,And the other tribes imitated them,it was the case of the Pueblos Indians of Santo Domingo,Santa Anna,Jémez,Laguna and Acoma who followed the movement.
Arts and crafts and Indian jewelry are high quality today,it's the reflection of a perfect skill