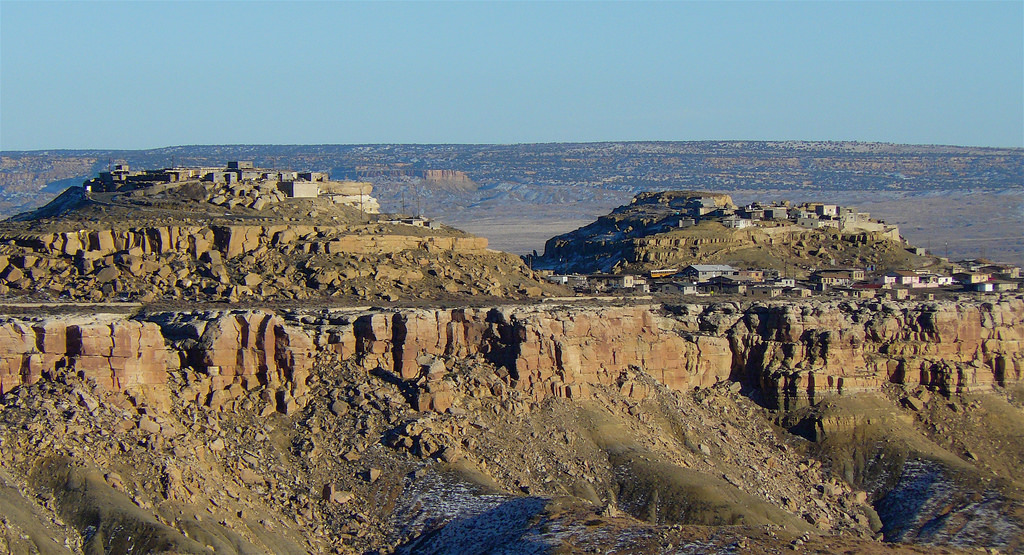 Hopi means"peaceful people",they are living in the north center of Arizona on the Black Mesa and spreaded over in villages on  three Mesas along the Highway 264 and numbered from east to west.The First Mesa with the villages of Walpi,Tewa and Sichomovi,the Second Mesa with the villages of Shongopavi,Mishongnovi and Shipaulavi and the Third Mesa with Hotevilla,Bacavi,Moencopi,Kykotsmovi and Oraibi that was build before 1150 A.D.It's the oldest village still occupied in the United States.Hopi reservation is 622 000 acres wide and landlocked because it's surrounded by the Navajos reservation.Their language is a Shoshone language from the Uto-Aztecs.The Hopi is bounded to the Pima,Ute and Paiute in the Southwest.They are farmers living on a dry soil,but they adapted themselves to this desert region,little springs at the foot of the Mesas help them irrigate their fields and when they aren't busy in farming,they are plumber,electricians,garage mechanicians or employees at public works.

The Hopis have an individualist temperament.When the Spanish tried to convert them to catholicism,they killed the priest and joined the Pueblos Indians and all the villages rallied to the mutiny.A few years later,the Spanish came back but the Hopis fought bravely and they had to give up a second time.The Hopis are gathered by their religion and that's why they could keep their ancestral way of life.

They are celebrating many ceremonies on the Plazas,some are forbidden to the foreigners,others are open to tourists like the Snakes Dance.Each village have many Kivas,that is a sacred ceremonial room.It's in these rooms away from prying eyes that the men are celebrating the secret rites.The Hopis Kivas are rectangular facing north-south.Oraibi village have 13 Kivas,and the entire reservation owns 33.No visitors will be allowed to watch a ceremony into these sacred rooms.

Surrounded by four sacred mountains,the Navajo Nation is a great destination to retrace history and step back into time.Traditional Navajo teachings and values remain strong among the Navajo people despite hardships they endured throughout history.In 1860,more than 8,000 Navajos were forced to march to Bosque Redondo near Fort Sumner,N.M. where they were incarcereted for four years before they were allowed back to their homeland.

Moreover,many young Navajos were taken from their homes to attend distant schools...they were scolded for talking Navajo.Ironically,the Navajo language was used as a secret code in World War II to defeat the Japanese.The Navajo men who were on the frontline are known today as the Navajo Code Talkers.

According to traditional Navajo teaching,the Navajo language was given to us as a gift by the creator.The soul of traditional Navajo philosophy and culture is the Navajo language.Today,many traditional Navajo prayer's,songs and ceremonies are still conducted.This spiritual lineage is passed from one generation to another to create balance and harmony.The Navajo Nation is a mecca and visual symphony for elegant art.Many Navajos are fluent in the universal language of art,which permeats their daily lives.Accomplished Navajo artists are world-renowned for their unsurpassed natural creativity as exemplified in their exquisite Navajo rugs,symbolic Navajo baskets,stunning turquoise and silver jewelry,fine handmade traditional Navajo pottery,meticulously-designed paintings,and beautiful handcrafted sculptures.See how distinguished Navajo artists savor the challenge and interpret traditional and modern-day Navajo culture.

Late summer and autumn,on the Navajo Nation is a season that celebrates the cultural pride and harvest of indigenous food.Share the creative expression of the Navajo people during a tribal Navajo fair,which are usually held from mid-July to mid-October.See Navajos adorned with traditional Navajo attire and dance to the beat of a ceremonial drum during a traditional Navajo song and dance;purchase a one-of-a-kind Navajo decor;view a colorful parade;see how young Navajo women vie to be a traditional Navajo queen;see Navajo cowboys and cowgirls test their horsemanship skills at an all-Indian Rodeo;hear mesmerizing Navajo musicians capture the spirit of Navajo culture;and don't forget to treat your taste buds with an array of traditional Navajo cuisine such as mouth-watering kneel down bread to hearty lamb stew.

Recreationists can quicken their pulse and their love for the outdoors during the Annual Narbona Pass Classic situated in the haven of the Chuska mountains.Horseback riding enthusiasts can segue their adventure into the rolling hills at Monument Valley.Maybe you want to meander off the beaten path and take in a hike at Canyon de Chelly or anchor a mild fishing excursion at Wheatfields Lake located along the Dinetah Scenic Byway.

Whatever your passion,adventure or tranquility,Navajoland is an ideal tourism destination.So mark your calendar and make plans to enhance your cultural understanding and embrace the rich legacy of the Navajo Nation.

During the Civil War,the American government wanted to integrate New-Mexico and Arizona into the Union.They thought they could stop the Mescaleros Apaches and the Navajos raids.In 1863,General Carlton asked Colonel Christopher Carson to gather the Navajos to bring them to a new reservation east of New-Mexico at Fort Sumner,also known as Bosque Redondo.In 1864 began for 8000 Navajos "The Long Walk",a dark event of their story.About 1000 prisoners died on that 310 miles trail.Those who complained about tiring or illness have been executed,even the women near to give birth.Fort Sumner have been a grave for many Navajos,in lack of food and blankets,and a lot of epidemics.In 1868 the government gave them the choice to join the Indian Territory of Oklahoma or to go back to their ancient territory in the Southwest,they went back to the Southwest.

The Navajos and Monument Valley

Monument Valley is located at 5249 feet in northern Arizona and in the south of Utah on 120 km².It is one of the most extraordinary phenomenon of the United States.The Navajos call the place "Tsé Bii ' Ndzisgaii "which means" valley of rocks ".The ocher color of the rock in massive sandstone,comes from iron oxide and manganese. Many films have been shot in this magnificent site like Stagecoach,She wore a yellow ribbon,The Comancheros or The Searchers.

The Navajo have learned to deal with visitors of the park,offering them jewelery,guided tours of the park or weaving demonstration.Their main source of income comes from tourism.For the few families living in Monument Valley,the dilemma between preservation and Economic imperatives have turned into a vicious circle.They have neither electricity nor running water,both stop at the hotel for tourists,because the tribal council wants everything to remain natural.Residents demand water,electricity,school buses and better information panels for tourists.They do not want to be photographed as they see fit.

45 miles south of Gallup,you find Zuni,the biggest Pueblo of New-Mexico.The Zunis are the descendants of the Anasazis.There are about 10 000 people,and the reservation is 402 287 acres wide situated on the McKinley county.Zuni is the only village remaining from the seven legendary cities of Cibola.The Pueblo haven't changed a lot since the the mid nineteen century,and many women are still baking bread in adobe owens outside the house.On the territory you find a lot of remains from 600 or 700 years ago.The Zunis are neutral,they don't care about conflicts and wars and that's why they resist to the change of time around them.

When the first Spanish came on their land in 1539,the Zunis traveled the region since 5 centuries.Estevanico with a few soldiers in armor headed towards Zuni Pueblo,but the Indians were waiting on them,and the Spanish fell in an embush.They kidnapped Estevanico and killed him next day.One year later,Fransisco Vasquez de Coronado came with one hundred men and conquered the Zunis at Hawikuh battle.When the Pueblos uprised in 1860,more than 2500 Zunis joined the rebels to chase the Spanish.

Life of Zunis people have changed since the white man arrived,but his religion didn't suffer.The Zunis existence turns entierly to the religion and the sun represents the holy god.The most spectacular ceremony is the Shalakos Kachinas Ceremony that takes place end of november.One part of the ritual is open to foreigners.The Shalakos are representing sacred Kachinas.Ancient ceremonies like that becomes rare,it's the reflection of the unconquerable faith of the Zunis.