The Arapahos,traditionally hunters and fishermen, have evolved in sedentary and agricultural activities because there is not enough employment to feed the whole family and the oil revenues are only for non-Indian companies, and many pridefully refuse the jobs of the white man.Alcohol and drugs are devastating. Family and social stability,women are emerging as an increasingly evident economic force. A growing number of women are elected to positions of responsibility on the councils Tribal communities.

What is known of the life of the Native American before the invasion of the whites? The Occidental woman is completely dependent from her husband, contrary to the Native American woman who has always been autonomous. When men went hunting, The women had to feed the family under rather difficult conditions. They also hunted but without too much distance from their teepee, they knew how to make and take the traps.

Women played a predominant economic and social role among the tribes, but there was no golden age for them in the Native American world,their daily tasks were often painful. If in her childhood the little girl enjoyed the same freedom as a boy,everything changed in adolescence,for as soon as she entered her life as a woman she had to raise children, raise them, cook, sow, harvest, fetch water, make Potteries, clothing and accessories.The men kept meeting, went to war, or went on hunting.The Iroquoises owned the fields of the crops and houses, mastered the subsistence of the tribe and could exercise some power on men.The Choctaw women elected the clan chiefs.Sioux women could decide to slip among the warriors during the fighting.By the comanches the wife of a medicine man assisted her husband.

Adultery was severely suppressed among the Flatheads,although it was perfectly accepted among the Hopis. In some groups, women were sometimes free to leave their husband when they decided. Children or remarry several times without any bitterness towards their ex-husbands. Shoshones White Knifes once thought that they risked becoming blind or getting sick by looking at a woman's genitals.During menstruation,women Could not touch food and become dangerous for men. When the notion of blood-related danger was too strong, women withdrew from social life for a few days and took refuge in the forest. But this situation was not Safe as women and horses were the prey and spoils of rival clans, they could be attacked at any time.

From generation to generation, Indian women have acquired a certain habit of fighting in peace as in war.Native American women have suffered so much that they can cope together.The struggle is like a long confinement,We must not be alone,they must help each other and remain in solidarity.

A Chippewa woman and her baby 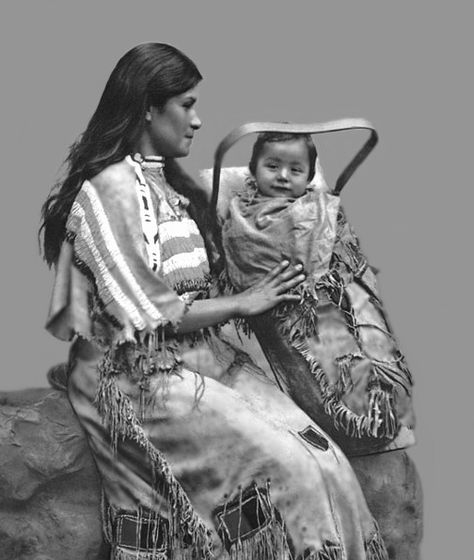