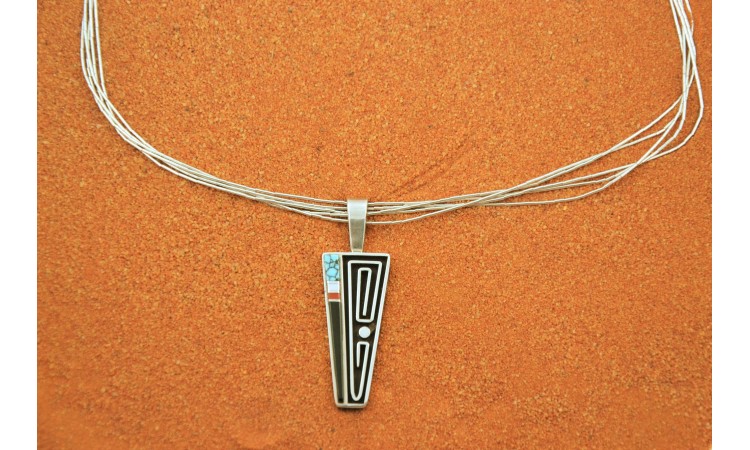 This unique piece in Sterling Silver was handcrafted by Albert Nells.The chain is in liquid silver and the pendant is inlaid with turquoise,opal,coral onyx and mother of pearl.

The colour of Turquoise stone goes from blue,pale blue to green.The most known  mines from the United States are the Apache Canyon mine in California and Sleeping beauty mine in Arizona,that's why you can find the "Sleeping Beauty turquoise", very popular,because it has less impurity.For the Navajos the turquoise stone represents hapiness,luck and health.Turquoise is the most used stone in Native American arts and  crafts

Onyx is a variety of agate with various colors,but you mostly will find it with its black aspect.It's known to be a calming stone.The Native americans believe it collects negative energy from you while tou wearing it.

Opal is greatly prized from the native american artists,because it has various colors.You'll find white stones,black,blue or even yellow called stone of fire.The world capital of opal is Coober Peddy,situated 500 miles south of Alice Springs in Australia.

Today only the red coral and the Japan coral is still used in jewelry.Coral has organic origins,it's the skeletal remains of a marine animal called coral polyps.Coral is known to be soothing and protective.

Mother of pearl is the common name for iridescent nacre, a blend of minerals that are secreted by oysters and other mollusks and deposited inside their shells, coating and protecting them from parasites and foreign objects.

Nacre, or mother of pearl, is the same substance that is deposited around a tiny particle that becomes lodged in the mollusk--either naturally or inserted by a human. Eventually, this nacre builds around the small object and becomes a pearl.

Be the first to write your review!